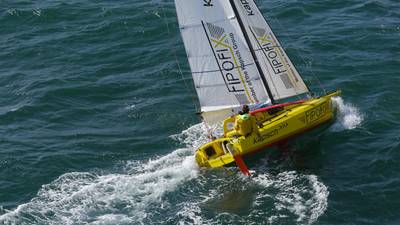 Only three days left to the restart of our transatlantic-record attempt  single-handed – nonstop – without any external assistance.

From continent to continent, "Proof of Principle” stands for the world first attempt to cross the North Atlantic in an only 16 foot (4.90 meters length) sailing boat, which is entirety out of volcanic fibres, single-handed, nonstop and without any external assistance from east to west and subsequently from west to east by the dreadful northern route.

Due to serious electricity problems on board of Open16 Fipofix skipper Norbert Sedlacek had to stop in Gijón (ESP) on November 13, 2013 after three stormy days in the Bay of Biscay.

After adaptation of the board electricity power supply, Harald Sedlacek, son of the Austrian extreme sailor, will go about his first extreme-sailing trip with this record attempt.

The challenges of the wintry north Atlantic, coldness, stormy sea and loneliness are waiting for him. During the estimated sailing time of 40 days, he will sail approximately 4.400 nautical miles in a sailing boat which provides only 1.5 m² of “protected” area.

An extreme-sailing adventure in a class of its own, which shall proof that with the synergies of innovative product- and material- technology and resolute power of endurance nearly everything is possible.