Dutch yard Amels has launched the 23rd model in its Amels 180 Limited Editions range, which has been named Papa.

The 55-metre Amels 180 superyacht was the first of many new Amels superyachts nearing completion for their owners before the summer season begins.

For the yacht’s crew, the launch is a milestone bringing the maiden voyage closer after many months working together with the Amels team. Captain Paul Bessant commented: “The teamwork here, the way that you feel so involved with everything, the relationship with the project managers. You feel very included, you feel that you really are part of the process from the beginning to the launch.”

The launch uses the Roll-on / Float-off or ‘RoFlo’ method, a launching operation we’ve perfected at Amels – with 35 operations over the last decade.

Basically, we move the yacht from one of the fully climate-controlled covered building bays onto a floating pontoon, then to a floating drydock, which submerges and the yacht floats. It’s fast, efficient and low-risk for the yacht, but requires a high degree of planning and teamwork.

Adding to the complexity, Amels also reversed the operation (Float-on / Roll-off) for the hull of another new superyacht, which is now in one of the two building bays. The yard also has two fully climate-controlled drydocks, one 140 metres in length and one 200 metres in length.

Computational fluid dynamics (CFD) analysis and Model Test at IIT Madras was done to optimize Fuel Efficiency and firming up the Powering requirement. 3-D Modelling of the entire Boat has been done in-house to improve ergonomics and lay-out.

The vessel will be able to accommodate Two (2) patients and will have a crew capacity of 7, including the paramedical staff. The vessel will also have various paramedical facilities like examination and nursing room, medical beds, mortuary freezer, refrigerator and medical lockers. There will be a Jason's cradle to safely rescue people from sea.

Marine ambulances will be used for the rescue and instant treatment to the marine fishermen in distress as well as for normal patrolling.

The vessels are due for delivery in early 2020. Indian oil and gas giant Bharat Petroleum Corporation Ltd. (BPCL) is also supporting the project as part of its corporate social responsibility (CSR) initiatives. 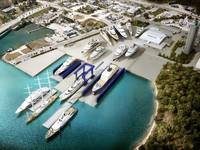 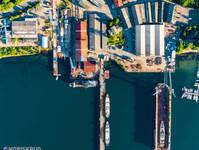