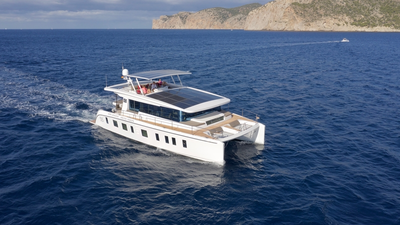 Burma Boating has acquired S55, a 16.7-meter solar-powered yacht, which will offer expeditions around the Mergui Archipelago from January 2019.

The S55 catamaran accommodates up to six guests and three crew members, and is composed of three levels including a flybridge commanding 360-degree views, a 40m² air-conditioned salon, and four cabins each with queen-sized beds and private en-suite bathrooms.

Built in 2018, this ultra-modern catamaran becomes the first 100% solar-run boat to sail in Asia, according to her designers, Silent-Yachts. The S55’s 30 mounted solar panels create 10kWp, which allows her to travel an unlimited distance on an average sunny day (though she also maintains a fuel-based back-up engine). Two silent 30kW motors drive the S55 to a maximum speed of 12 knots.

The solar catamaran will be skippered by Captain Ajun May from Germany.

Burma Boating will offer cruises on the S55 for up to six persons, starting at US$3,200 per day. It also offers a choice of 4-day or 6-day cabin charters leaving from the port of Kawthaung, southern Myanmar, each Saturday from November through to May. 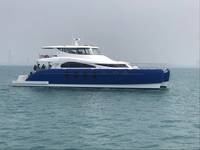