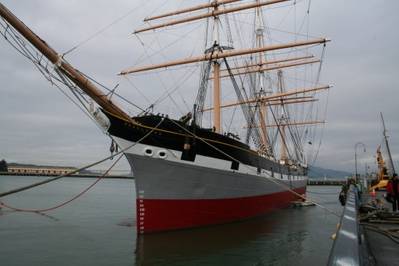 Bay Ship & Yacht has been chosen for the third time to perform maintenance on the 131-year-old historic ship, Balclutha. (Photo: Business Wire)

Bay Ship and Yacht Co. has announced it has once again been honored with the contract to perform maintenance on the historic sailing ship Balclutha. This is the third time the reputable ship yard has been chosen to perform much-needed detailed maintenance on the 131-year-old ship. A three-mast, steel-hulled square-rigged sailing ship, the Balclutha is one of the last of her kind.

“The Balclutha is truly a gem of American history. It is a rare day that you are able to see one of these grand old ladies high and dry in dock,” said Richard Maguire, Business Development Manager, Bay Ship & Yacht. “Upon her undocking, the ship will remain at the yard pier side, where we will remove her foremast, mainmast and mizzenmast yard arms for needed repairs and paint preservation. Her presence there is reminiscent of the days of old when many fine sailing ships like the Balclutha lined the estuary representing cargo companies such as the Alaskan Packers and Red Star.
“Bay Ship and Yacht has a deep understanding of these great historic sailing ships, and the yard still works with and maintains many of the original tools required to perform proper maintenance on these older vessels,” Maguire continued. “We will use these tools to repair and replace the poop decking with caulking, irons, oakum and pitch.”
During her stay at Bay Ship & Yacht, the Balclutha will first receive an ultrasonic hull plate survey, which will indicate whether the ship’s hull plate will require replacement or repair. Next, Balclutha will undergo a full sand blast of her freeboard and underbody in order to remove old coatings and better assess the condition of her hull. Following, she will receive a full coating system to preserve her steel for another six years.
In addition, Bay ship and Yacht will fabricate and install a modern piece of equipment on the Balclutha that was certainly not a consideration 1886, a wheel chair lift. The lift, which will lead from her main deck down to her lower cargo holds, will allow more visitors to have the opportunity to experience the grandeur of the ship and understand more about what is was like to be a part of the crew.
The Balclutha: A Brief History
The Balclutha was built in Glasgow, Scotland in 1886. The name “Balclutha” is Gaelic for “Town on the Clyde.” The ship made her maiden journey to San Francisco in 1887 and passed under the Golden Gate Bridge approximately 140 days after her departure. During that time, the Balclutha traded coal, potters, cutlery and Scottish whiskey among other goods.
In 1889, the Balclutha’s registry was transferred to the Kingdom of Hawaii and she joined the Pacific Coast lumber trade, carrying goods north to the Puget Sound in Washington and across the Pacific to Australia. She was the last vessel to fly the flag of the Hawaiian kingdom.
Her registry was transferred to a “coastwise” trade between American ports in 1901 when she became part of the salmon trade in Alaska. In 1904, she ran aground in near Kodiak Island. The Alaska Packers Associations purchased the badly damaged boat and renamed her the Star of Alaska. For the 26 years following, the Star of Alaska sailed from Alameda each April to Chignik Bay, Alaska carrying supplies and cannery workers.
She was retired from the Star fleet and purchased by Frank and Rose Kissinger in 1933. The Kissingers renamed her the Pacific Queen. During their ownership, the couple lived aboard the ship leasing her for films including Treasure Island.
The San Francisco museum purchased the ship in 1954, restored her and brought back the original Balclutha. The National Park Service took charge of her in 1978 and in 1985, the Balclutha became a National Historic Landmark.
Bay Ship and Yacht offers repairs in all crafts from painting to structural repair, piping, electrical, joiner, lagger, machinist and other crafts.
• Alaska • Australia • Golden Gate Bridge