Crystal Cruises announced an expansion plan under new owners Genting Hong Kong that includes three 1,000-passenger vessels, its first new ships in decades. Plus, Crystal will expand into adventure, yacht and river cruising, and luxury jet trips. The three Crystal Exclusive Class ships will be about the same size as the 20-year-old Crystal Symphony and the slightly larger 2003-built Crystal Serenity. The line has signed a letter of intent with Lloyd Werft to build the ocean ships, which will have an unprecedented space ratio of 100 gross tons of space per guest, Crystal said. 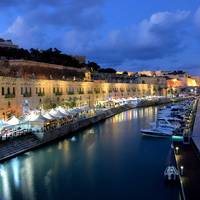 The Malta Gaming Authority (MGA) has approved the first application received from Crystal Cruises, which is represented in Malta by Gollcher Group, for its Crystal Serenity which will call to Malta on June 5 and 6, 2015. Crystal’s onboard casinos on Crystal Serenity offer games including Blackjack, Craps, Roulette, 3 Card Poker, Ultimate Texas Hold’em and Mini-Baccarat (on request), as well as slot and video poker machines. “Valletta Cruise Port welcomes this first application, following our instigation to introduce this legislation.