Timed for release with the 60th anniversary of the Unsinkable Legend, Boston Whaler has rolled out the new 170 Montauk and 150 Montauk, modern-day editions of its most iconic model. “The Montauk has always been about effortless utility and purposeful design,” said Jeff Vaughn, Whaler vice president of sales, marketing and customer service. “We worked to maintain that clean simplicity and ultimate reliability, while also leveraging customer feedback to implement strategic upgrades. First unveiled in Sarasota during Whaler’s weeklong anniversary celebration kickoff…

During the 2014 Cannes International Boat Show, which opened September 9, representatives from Boston Whaler introduced the all-new 420 Outrage, a boat with incredible comfort, capability and cutting-edge features. “The 420 Outrage is the largest Boston Whaler ever produced,” said Jeff Vaughn, vice president of sales, marketing and customer service. “ It all began by asking, ‘How can we push beyond the limits of what’s possible in a center console boat?’ We’ve found our answer in the 420 Outrage .

The stage was set during the 2014 Miami International Boat Show, where Boston Whaler hosted its annual press event on Thursday. As remarks drew to a close, President Huw Bower stepped forward to announce a special unveiling. Pulling the curtain from a large display revealed an intricate, three-foot scale model—a perfect replica of the coming 420 Outrage. “You’re looking at what will be the largest Boston Whaler ever produced,” Jeff Vaughn, vice president of sales, marketing and customer service, addressed the crowd. “It all began by asking… 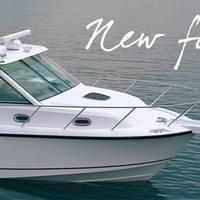 “In the new 345 Conquest, we’ve taken that foundation and expanded the possibilities for onboard functionality, creating spaces that are even more inviting, even more useful, while retaining the timeless no-frills aesthetic that contributes to Conquest’s appeal,” says Jeff Vaughn, Boston Whaler’s vice president of sales. The layout of the new 345 Conquest includes a redesigned helm companion area, where family members and friends can join the captain in climate-controlled comfort inside the integrated open windshield/hard-top enclosure. 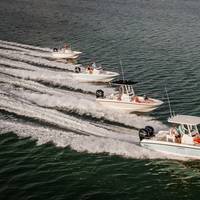 Across the 'Dauntless' lineup, from the nimble 170 to the flagship 270, say the company, every multicapable Dauntless equips boaters with everything needed to take on serious fishing, action-packed watersports, and comfortable cruising in true Whaler style. “The new Dauntless family is the embodiment of a clever transformation,” said Jeff Vaughn, Boston Whaler’s vice president of sales, marketing and customer service. “The Dauntless lineup has long been appreciated for its ability to multitask. 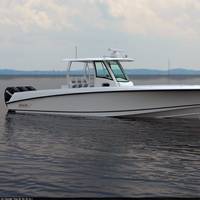 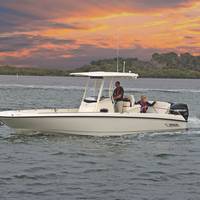 New vessel is largest model in this feature-rich boat family. Boston Whaler expands its stylish, feature-rich Dauntless line with the addition of the brand-new 270 Dauntless. As Whaler’s largest Dauntless yet, the 270 joins a family of boats that includes the top-selling 230 Dauntless. The 270 maintains the bold style and impeccable comfort that are Dauntless hallmarks, with enhancements to make this well-appointed boat even bigger and better. customer service. and leaning post, and you can cruise farther thanks to its size and larger fuel capacity. lounge in comfort and safety.