Britain's biggest ever cruise ship, the 141,000-ton Britannia, which was officially named by Her Majesty The Queen in Southampton has set off on its maiden voyage.

Thousands of passengers will be among the first to experience the luxury, style and elegance of the largest ship ever built solely for the rapidly growing British market. The 3,600-passenger vessel Britannia left for Gibraltar on Saturday night.
The super liner was named by the Queen on Tuesday in Southampton, she was given a traditional send off by the Royal Marines band from Portsmouth and with confetti covering the ship, followed by a big fireworks display. Hundreds of people lined the shore of Southampton Water with many more on small craft following her out into The Solent.
On this first voyage the 84,000 horsepower boat will also visit Barcelona, Monte Carlo, Rome, Ajaccio and Cadiz before returning to Southampton. During the summer it will be based in Southampton, during the winter in the Caribbean. In its first year the boat is scheduled to visit 57 ports in 31 countries.
The Britannia has plenty of facilities for passengers, with four swimming pools, a 936-seater theatre, 15 passenger decks, spa, library, gym, children's play areas, sports arena, a variety of shops and a three-tier atrium.
• Gibraltar • Caribbean 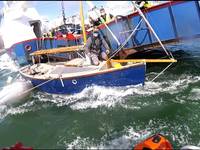