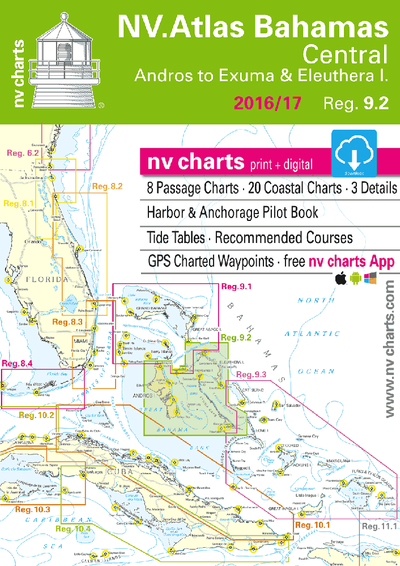 nv charts has announced the release of their newly updated chart sets for Florida, the Bahamas and the Caribbean for 2016/17 in paper and digital format. In addition to being updated, the new NV.Atlas format brings a modern, handy design to the charts that’s practical and easy to use.

The chart set includes a download of digital charts, including free navigation software, plus the free nv charts Mobile App for iOS and Android mobile devices. The App includes free digital updates for this chart set for 2016/17. nv charts are relied on for accuracy and dependability by recreational boaters, professionals mariners, and the US. Coast Guard.

The new chart sets now feature a compact, fold-over format, (unbound 'booklet') the NV.Atlas, reducing the physical size of the paper chart set by half (but not the cartography itself) for ease of use on today's smaller navigation stations and chart tables. "Since these charts are produced from our own cartographic databases, rather than simply copied from government sources, we have designed them so that no critical elements are in the crease, or fold, where they might lose definition over time from use and wear," states Hasko Scheidt, CEO.
The new chart sets release is updated and meticulously surveyed and now available just in time for cruising the Caribbean Sea during the upcoming winter months. The set is available in a variety of formats - paper, digital, SD Card devices. They are designed for sailors, motor boaters, fishermen and professional mariners, and cruising enthusiasts. They include the following:
- Passage Charts
- Coastal Charts
- Harbor and Anchorage Pilot (only Florida, Bahamas and Virgin Islands)
- GPS Charted Waypoints and Approaches
- Download of digital charts, including free Navigation Software
- Tide Tables and Recommended Courses
- Free nv charts Mobile App for iOS and Android
The chart set is based on reliable data from various sources including nv charts' own survey data, with clear cartography and conformity with international chart standards. nv charts offer unique features not found in other chart sets, e.g., more distinctive shore and shallows cartography, aids to navigation and light characteristics, tidal information, and even helpful pages in the back outlining symbols, legends, and other data that help the navigator interpret the information in the chart. The cartography is visually distinct; unique color differences make specific depths, shoals, reefs, exposed tidal areas stand out for quick, easy recognition. Also, lighthouses illustrate their light characteristics for better identification. Legend pages at the back of the set provide a guide to symbols, legends, and other data that help the navigator interpret the information in the chart. nv charts products in digital format are also available on SD memory cards for chartplotters including Lowrance, Simrad and B&G chartplotter systems.
• Android • Bahamas • Caribbean