Twelve teams celebrated the completion of the 40,000-nautical-mile ocean race — the world's longest — by sailing up the River Thames and under London's iconic Tower Bridge.
The fleet began its parade at the Thames Barrier, and passed London landmarks such as Greenwich's Old Royal Naval College, The O2 Arena, Canary Wharf and historic Wapping.
Tower Bridge lifted twice for the twelve teams, which all passed through in front of thousands of spectators on supporter boats who turned out to cheer home the international sailors into the UK capital.
The Clipper 2015-16 Race prizes have been awarded at a ceremony in St Katharine Docks following the conclusion of the global series in London.
First, the pennants were awarded for Race 14, the finale of the series, with Derry~Londonderry~Doire taking the first place pennant for its victory last night.
Visit Seattle was awarded the second place pennant, and LMAX Exchange the third place pennant for Race 14.
Each of the twelve teams then took to the stage and were presented with a framed photo of their boat.
• River Thames • United Kingdom 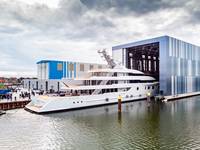 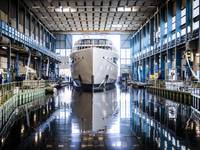