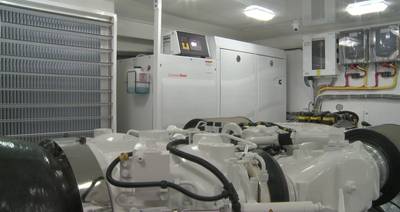 Cummins will now feature a new Onan Marine QD series generator with a power range of 40 kWe to 65 kWe, offering customers reduced emissions with the quietest operation in the industry, according to the manufacturer.
The series’ expanded power range was announced during the Miami International Boat Show, and comes as recreational vessels are requiring more electrical capacity to power increasing house loads.
The new platform can be paralleled allowing it to provide electrical power for vessels with a need up to 130 kWe enabling Cummins to offer a QD Series product for a larger class of yacht.
Cummins said it will offer the new product in several configurations including two cooling system options, heat exchange or keel cooled, with or without the Onan sound shield and also with single or three phase power options. The new power range will be sold under six different model names, MDDCS, MDDCT, MDDCU, MDDCW and MDDCY, depending on the kilowatt and the hertz requirement.
• Cummins Inc. • Environmental Protection Agency • U.S. Environmental Protection Agency