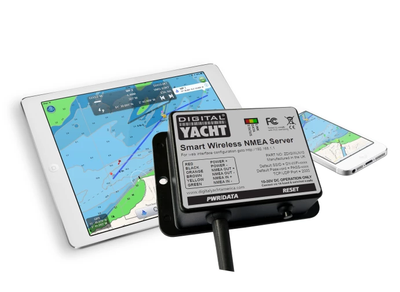 Sailors like the idea of using an iPad, tablet or smart phone for on board navigation with their simple touch screen interface and vast range of charting and instrument apps.

Digital Yacht’s new WLN10 Smart NMEA to wifi gateway takes integration afloat even further with the ability to connect to existing on board GPS, AIS and instrument systems and transfer the data wirelessly to the tablet – allowing compatible apps to display and compute with real time information. The WLN10 creates a password protected wifi network and apps don't need an internet connection to function.

When connected to, for example, an AIS system, real time AIS target positions and identity data will be displayed on detailed electronic charting through compatible apps including NavLink, TimeZero, iAIS, iSailor, Seapilot and hundreds more. The tablet becomes a full function navigation display.

The new WLN10 can now be programmed through its simple web style browser interface for NMEA 0183 data at 4800 or 38400 baud as well as allowing multiple devices to connect so you could be using a PC at the chart table with an iPad on deck.  It's also bidirectional so apps can control an autopilot if this function is enabled.

Digital Yacht will show the device at the Southampton Boat Show 2018, from September 14-23,where it will be on display with a special introductory price of £120 inc vat ($154).  Also on show will be the new WLN30 with multiple NMEA inputs and a NMEA 2000 variant.