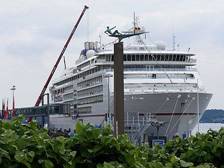 ‘Europa 2’ made her first appearance in the port of Kiel early on the morning of June 11, 2014. The new Hapag-Lloyd Cruises flagship, arriving from Copenhagen, was greeted in the Kiel Fiord by a water fountain display from a port tug and escorted to her berth at the Ostseekai Cruise Shipping Terminal. During an on-board reception after her arrival, Robert Vollborn, Kiel’s First Deputy City President, welcomed Captain Ulf Wolter to the Schleswig-Holstein state capital and presented him with the Port of Kiel’s commemorative ‘First Call’ plaque. The Managing Director of the Port of Kiel (SEEHAFEN KIEL GmbH & Co. KG), Dr Dirk Claus said “this first visit by ‘Europa 2’ is something very special for the port.

We are very pleased that Kiel has a firm place in Hapag-Lloyd Cruises route planning and that we can now welcome the company’s flagship for the first time”.

‘Europa 2’ was completed in 2013 in St. Nazaire, France. She is of just about 43,000 GT and is 225 m long and 26.70 m wide. Up to 500 passengers find accommodation in her suites and the Berlitz Cruise Guide 2014 has put her in the highest cruise category – five-star-plus. ‘Europa 2’ also belongs to that group of ships certified in the Environmental Ship Index (ESI) as particularly eco-friendly. As such she qualifies for a rebate on standard port fees – something that applies in the Port of Kiel as well as elsewhere.

‘Europa 2’ was leaving the Kiel Fiord on the evening of her arrival headed for the picturesque seaside resorts along the Baltic. Among the destinations on a cruise lasting until Sunday were the islands of Bornholm, Usedom and Rügen. On her return to Kiel ‘Europa 2’ was playing host on June 15th to the popular German football talk show ‘Doppelpass’ (Double Pass), being aired live from on board the ship by the TV channel Sport 1. 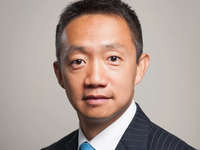