Evinrude hasannounced that it has been named Official Engine Supplier of New York Yacht Club American Magic, a professional sailing team and Challenger for the 36th America’s Cup.

Evinrude will outfit American Magic’s fleet of chase boats with 300 HP E-TEC G2 engines. In addition, Evinrude will provide the organization’s technical crew with a training course at its Sturtevant facility. Each engine will also be custom wrapped with an American flag-based design.

The America’s Cup is the highest prize in sailing, and the oldest event in international sports. The Cup was first contested in 1851, predating the modern Olympic Games by 45 years. A 132-year stretch from 1851 to 1983 saw boats representing New York Yacht Club and the United States successfully defend the trophy 24 times. In 1983, Australia II became the first Challenger to successfully lift the trophy from the Americans. The Cup is currently held by the Royal New Zealand Yacht Squadron’s Emirates Team New Zealand, who will be the defending team in 2021.

Evinrude’s engine line up, from 3.5 to 300 HP, offers customers superior value across a full range of applications, and are available at authorized Evinrude dealerships worldwide. 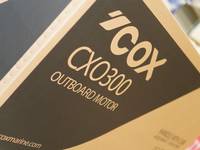