When Furuno added its Black Box system to their NavNet TZtouch family, it provided flexibility for captains that wanted a TZtouch system on larger displays. Shortly after that, Furuno introduced its new line of Multi-touch Marine Monitors that ranged in size from 17-24 inches. Customers then came back to Furuno requesting the added flexibility of viewing and controlling their TZtouch displays from a remote position. While Furuno offers its free “NavNet Remote” app for the iPad, some customers feel there is no substitute for buttons and tactile control. To accommodate their requests, Furuno is now introducing the all-new MCU002 Remote Control Unit.

The MCU002 Remote Controller is compatible for use with the entire NavNet TZtouch series, including the TZTBB Black Box, as well as theTZT14 and TZT9 MFD. This controller benefits installations where the displays are recessed and/or mounted a bit out of conventional reach. Furuno said the design of the controller is compact and light, allowing it to be installed anywhere, even as an “Armchair Controller”, if desired.

This remote control gives users access to all NavNet TZtouch features and controls, including Chart Plotting functions, like panning, zooming and route creation. Users can also control the Radar, Fish Finder, NavPilot autopilot (when interfaced), RotoKey menu functionality and even custom page displays. The MCU002 does not replace touch control (unless you want it to), it simply enhances it. So when you mount this remote alongside your currently installed TZT14 or TZT9 TZtouch display, it will give direct, instant access to tactile controls, which can be critical in rough seas. At $180 MSRP, this remote control is a really inexpensive way to get direct control of your MFD. The only thing you’ll need to do is make sure TZtouch MFD’s are updated with the very latest operating software, version 3.12 or above.

Furuno has also recently released version 3.12 of its TZtouch Software. This latest version of software enables operation with the MCU002 remote control and offers new features like optimized active route synchronization between NavNet 3D and MaxSea TimeZero software; auto transmission power setting for the DFF1-UHD CHIRP sounder; and enhanced on-screen DSC call and position indication. The software can be downloaded from Furuno’s website and installed onto each of your displays, or you can contact a Furuno dealer and hire them to update the system for you. 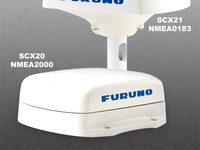