Celia Konowe is a rising college senior from Reston, Virginia...

While much of the COP26 coverage last year relayed an urgency to act swiftly before the planet reaches a point of no return, some moments of hope shown through. One such announcement was made by Ecuadorian President Guillermo Lasso, who shared news of an expanded marine reserve, aiming to protect biodiversity and increase productivity and, in turn, natural carbon sink processes.

The current ­­ (GMR) stands at roughly 130,000 km2, with an additional 60,000 km2 proposed. The expansion includes what is known as the Cocos-Galápagos Swimway, a “no-take” migratory marine highway that stretches 30,000 km2 and connects the GMR with protected waters around Cocos Island off the coast of Costa Rica. The two countries, along with Panama and Colombia, have also agreed to link their respective marine protected areas (MPAs) to create the Eastern Tropical Pacific Marine Corridor, one of the largest MPAs in the world.

The news arrived in a timely manner as environmental experts and organizations grapple with the challenge outlined at COP26 of keeping global temperatures below the 2°C mark by 2050. Marine reserves, which are high in biological productivity thanks to protected species and limited human disruption, serve as significant carbon sinks—a crucial role to play in today’s ever-warming climate. The archipelago also sits at the intersection of three ocean currents and El Niño, a climate phenomenon impacting weather patterns and events around the world. By protecting biodiversity and minimizing pollution and outside impacts, it is possible to increase the GMR’s ability to absorb CO2 from the atmosphere, withstand climate change and contribute to the livelihood of the local communities.

Galápagos Conservation Trust, an organization that works closely with the archipelago and protecting its marine species, pointed out that the GMR also boasts one of the richest concentrations of biodiversity in the world. It’s home to a wide range of permanent and migratory species like hammerhead, whale, and Galápagos sharks, green sea turtles, various tropical seabirds, Galápagos penguins and countless kinds of fish. The Cocos-Galápagos Swimway holds equally significant importance; as a migratory swimway, the area links the Ecuadorian and Costa Rican MPAs and provides a safe corridor through which fish, marine mammals and other migratory species can pass.

The expansion holds enormous significance for environmental conservation and in the fight against climate change. Protected oceans mean higher productivity, thriving biodiversity and a healthier environment—something that Ecuador knows well. “Today is a day that will remain in history for us, Ecuador, Galápagos and the world,” Lasso shared at COP26, according to a New York Times article. “We are not only preserving the future of our country, but the entire humanity.” 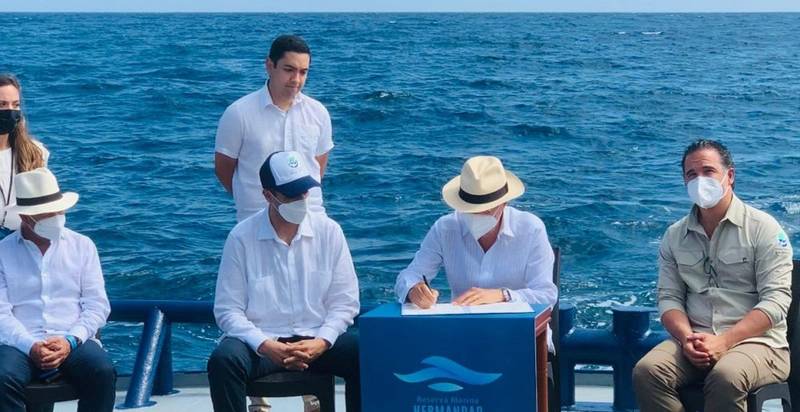