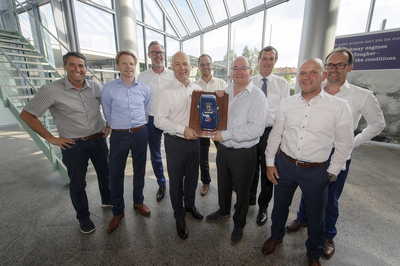 Rolls-Royce and Heesen Yachts, the Dutch shipyard and a manufacturer of displacement and semi-displacement motor yachts, have enjoyed a close collaborative partnership for decades in the field of marine propulsion technology. It has resulted in numerous internationally acclaimed superyachts equipped with MTU engines. The shipyard has now received an award from MTU – for a total installed power of 600,000 bhp. The MTU brand is part of Rolls-Royce Power Systems.
“The partnership between Heesen Yachts shipyard and MTU is something very special,” Knut Müller, Head of the Marine and Government Business Division at MTU, emphasises. “We have delivered a total of more than 220 engines to Heesen for more than 100 yachts and, in doing so, have together refined and enhanced the propulsion systems we design for luxury yachts. With the presentation of this award for installing MTU engines with a total output of 600,000 bhp, we would like to express our sincerest thanks to Heesen for this successful partnership.”
The visit of the Heesen delegation to Friedrichshafen and the presentation of the award to Arthur Brouwer, CEO of Heesen, demonstrated how closely the success stories of the two companies are linked. The first joint project in 1983 was soon to be succeeded by more projects that excelled each other as they met the growing demands of the yacht owners with regard to size and comfort. By the end of the '80s, Heesen had already caused a sensation with the construction of “Octopussy”, a 38-metre yacht fitted out with three 16-cylinder MTU engines (Series 396) that had been named after the famous James Bond film of the same name. This was followed up in 2010 by the first 20V 4000 engines installed in the multi award-winning “Galactica Star”. The high point to date is the “Galactica Super Nova”, which was launched last year – a 70-metre long luxury yacht equipped with a pair of MTU 20V 4000 engines, coupled with a Rolls-Royce waterjet. The outstanding performance of the propulsion system, combined with a newly designed, lightweight aluminium hull, gives the yacht a top speed of 30 knots, despite its size.
“Reliability and cutting-edge technology are decisive for us and for our customers. This is why we use MTU engines for our superyachts,” says Arthur Brouwer, CEO of Heesen, explaining the reason for the long-standing relationship with MTU.
With their joint “Nova Hybrid” project, Heesen and MTU have already taken another step forward in propulsion technology. The combined output of 1,200 kW from the diesel engines (2 MTU 12V 2000 M61 units) and 220 kW from the electric motors provide the owner with exceptional benefits in terms of increased comfort, acceleration, fuel efficiency and manoeuvrability. As early as the beginning of July 2017, Heesen announced that it had delivered the world’s first hybrid-powered, 50-metre long fast displacement luxury yacht to its owner under its new name HOME. When cruising at a speed of 9 knots, the yacht is absolutely silent and vibration-free – James Bond would certainly have been impressed.
• marine propulsion technology • propulsion systems • propulsion technology