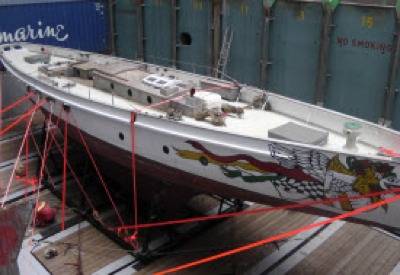 Troels Kløvedal has sailed the seven seas in his yacht Nordkaperen since 1967, but now returns to his native Denmark with his boat.

This summer, Troels will be travelling by sea around his home country, filming for a TV show on the new TV2 FRI channel, launching in Denmark in May.

In order to stay clear of the piracy in the Indian Ocean, Troels opted for having the Nordkaperen moved on a container vessel, and of course, Maersk Line were ready to assist and the yacht was loaded on Estelle Maersk in Tanjung Pelepas, Malaysia for a final destination in Aarhus, a direct move on the AE10 service.

Troels was there himself to oversee the operation, along with a good friend who is a chief officer. “Loading it was a bit complicated, because we had to take off the rig, and the main-mast was 10 cm too long to fit in a container, so it was laid on eight flat racks under the ship. The ship itself was put in a cradle and lifted on board the vessel. So now I’ve seen the Nordkaperen 40 meters up in the air, and I’ll admit I was a bit nervous,” he told Aarhus Port’s newsletter.

There was nothing to worry about, however, and Troels is quite happy with the cooperation with Maersk Line. “Everything worked to perfection, and nothing broke,” he said.

“This is what we do,” said Jens Elnegaard Larsen from Maersk Line’s Special Cargo Team, who coordinated the shipment. “While we’re used to handling exceptional cases, of course no two shipments are identical when you’re talking special cargo.”