For the third year in a row, the Cartagena International Boat Show (CIBS) will set anchor at the Cartagena Convention Center where they expect to draw close to 5,000 visitors from around the world on March 21, 22 and 23, 2015.

Exhibitors from around the world will showcase the newest boats, from luxury motor and sailing yachts to personal watercraft and sport fishers, including powerboats, sailboats, jet boats and electric boats, as well as the latest cutting-edge electronics, engines and marine accessories. In addition, there will be a full academic program offering nautical lectures by experts in the field and plenty of activities boaters will enjoy throughout the three-day event.   “We turned this into a world-class event where buyers can see products first hand, compare prices and purchase everything they need in one central location. The numbers from previous years speak for themselves, which leads us to believe that this event is an important experience, not only for boating enthusiasts but for the city of Cartagena,” says Juan Pablo Hernández, director & partner for easyFairs Latin America, the organizing company.

In its second year, the CIBS grew considerably, with an increase of 165% of the number of visitors and 126% of exhibitors, which positions the city and the region as an attractive destination for the marine business. EasyFairs works in partnership with local and national authorities, who aim to promote tourism in the country at an international level. "The realization of CIBS has been a platform for Colombian nautical companies to come to the market and for distributors of international brands to settle or somehow have a presence in the Colombian Caribbean. In 2014, 29 international brands had a presence at the show along with a complete flagship of United States companies," said J. Alfonso Diaz, chief executive officer for the Cartagena Chamber of Commerce.  According to estimates by the National Government, the marine lifestyle and the arrival of vessels to the Colombian coast could generate more than a thousand jobs during the boating season. "With this event, Cartagena attracts not only tourists but businesses from the nautical tourism sector, one of the most important for this Caribbean capital, driving the growth of the economies of the docking ports. In addition, if we augment the nautical tourism industry, we will match the number of people employed by the hotel industry, with which this event generates," said Zully Salazar, chief executive for Cartagena Tourism Corporation.

The National Marine Manufacturer’s Association (NMMA) will once again sponsor the USA Pavilion, whereby 20 specialty booths will be showcased.  “Today, tens of thousands of U.S. citizens safely visit Colombia each year. Tourism has experienced remarkable growth and the government recognizes the need to further develop their country’s recreational boating infrastructure in order to meet the growing demand of both international and domestic interest. By leading the efforts again on a USA Pavilion, the NMMA is ensuring our members are positioned to maximize their exposure at CIBS as it’s the perfect venue for the industry to gather and establish contacts, while strengthening business ties in this blossoming market.” says Julie Balzano, export development director for the NMMA.

For the first time, the event will present a Colombian pavilion called Nautical Destination Colombia, a stage dedicated to the sporting activities via sea, river and lakes from the ten most representative nautical tourist destinations in the country, including Antioquia, Atlántico, Bolívar, Boyacá, Cauca, Choco, Cordoba, Cundinamarca, Guajira, San Andres and Providencia, Santander, Sucre, Valle del Cauca, Vichada and the Gulf of Uraba.

Whether they’re a novice or a pro who fishes, sails, speeds or dives, next year’s show will be an ideal destination for every on-the-water enthusiast, giving attendees an all-access pass to the boating lifestyle, while providing live demonstrations, a shopping experience and activities for the entire family. 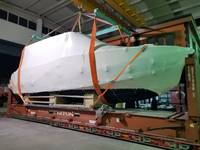