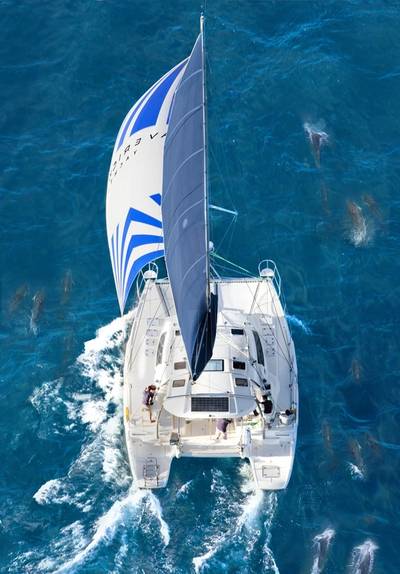 South African yacht builder, Maverick Yachts from Cape Town, has chosen SCIBS to launch down-under.
A new exhibitor at the Sanctuary Cove International Boat Show in 2015, and also new to Australia, Maverick Yachts from Cape Town, South Africa will be looking to make an impact with prospective clients and dealers.
On show will be the Maverick 440, on its way with its new owners following a circumnavigation of Australia.
Co-founder and co-owner with husband Rudi, Deslynn Pretorius explained, “Our Maverick 440 Island Home, was launched mid-2014 and the owner, from Perth, crossed the Indian Ocean from Cape Town via Mauritius to Fremantle and is currently circumnavigating Australia. They will arrive just in time for the show.”
The new Maverick 440 Executive catamaran is designed and built for easy handling and excellent performance. It is certified to the European Recreational Craft directive category A (Ocean) and comes in two models: the Maverick 400 Custom and the Maverick 440 Custom, which can either be completed to a Standard or Executive Specification.
According to the builder, both the Maverick 440 and Maverick 400 are suited for the private owners who wish to live aboard and take on even the most challenging bluewater cruising.
Designed by Phil Southwell, head of Southwell Yacht Design and described as “an ultra-deluxe home on the sea,” the Maverick range is designed for short-handed, long range cruising. Their extra-wide hulls provide good load-carrying capacity with generous cabins and excellent visibility.
Among the brand’s features is the ability to customize interiors. “Although all Maverick Catamarans look alike from the outside, each boat has its own character on the inside, as they are custom built with a great deal of input from the customer,” Deslynn said.
Deslynn said her company is a member of the Marine Industry Association of South Africa (MIASA) and the South African Boat Builders Export Council (SABBEX), so she was well aware of SCIBS’ stature in the international boat show circuit.
“SABBEX provide us with an annual calendar of international boat shows and we have been aware of the Sanctuary Cove show for some time but until now have not had a Maverick in Australia. There are Mavericks in the U.S., Caribbean and Europe and other regions. We have exhibited at other international boat shows, namely the U.S. Sailboat Show in Annapolis and the Strictly Sail Miami show for the past few years.
• Australia • South Africa • yacht builder