The highest levels of micro-plastic so far have been found in European waters where the Mediterranean Sea and Atlantic Ocean meet with a peak of 307 particles of micro-plastics per cubic metre.
The new findings reveal the concentrations of micro-plastics increase when the samples are taken closer to higher density populations such as Hong Kong and in areas where ocean surface currents tend to converge and concentrate marine debris.
“Regardless of where the data is taken, from remote parts of the ocean, such as the Antarctic, to areas close to major urban conurbations, we are consistently finding levels of micro-plastics, which clearly illustrates how pervasive they have become," said Dr. Sören Gutekunst, of GEOMAR Institute for Ocean Research Kiel, funded by the Cluster of Excellence Future Ocean, analysed the preliminary micro-plastics data at their laboratory in Kiel, Germany.
According to Volvo Ocean Race a total of 28 drifter buoys from the National Oceanic and Atmospheric Administration drifter program are being deployed by the vessels during four of the Volvo Ocean Race legs, at crucial oceanic regions to measure sea surface temperature and ocean current velocities. This will also help scientists understand how ocean currents could influence the movement of micro-plastic particles.
"The latest result are worrying when it comes to the potential consequences the micro-plastics pollution may pose to human and planetary health," said Anders Jacobson, Bluewater President and co-founder and CEO of Blue, the holding company that owns Bluewater.
Anders said Bluewater, as Official Water Provider and a Sustainability Partner for the Volvo Ocean Race, is fast-tracking its own sustainability initiatives to provide water purification solutions that are able to deliver clean drinking water to people everywhere.
• Antarctic • Atlantic Ocean • Germany 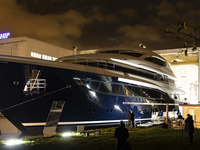