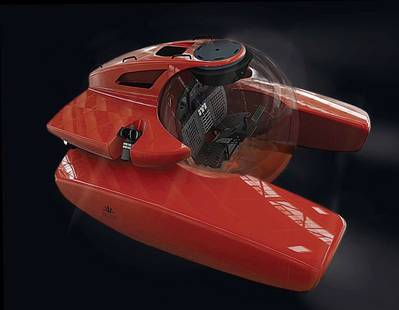 Triton Submarines LLC, a builder of personal submarines designed for yacht deployment, has launched a new submersible designed to dive to ocean depths of 6,600 feet, transporting passengers deeper than other models in its range.
Announcing the new submersible was Triton Submarines CEO L. Bruce Jones, who unveiled plans for the new Triton 6600/2 at a press conference held at the Fort Lauderdale International Boat Show on November 6.
“We are excited about this new deep-diving acrylic-hulled sub that will dive twice as deep as our 3300 series submersibles,” Jones said. “Like other Tritons, the transparent pressure hull provides remarkable viewing and the capability of diving over a mile deep adds tremendous versatility.”
The Triton 6600/2, which is now available for order, features capability to transport two people in air-conditioned comfort to 6,600 feet below the ocean’s surface.
Although similar in appearance to Triton’s 3300 series submersibles, 6600/2 includes a number of upgrades, including hulls that allow passengers to board after the vessel has been deployed into the water. Additionally, the Triton 6600/2’s passenger compartment remains at surface pressure irrespective of diving depth and is engineered utilizing a new technique developed by the manufacturer’s acrylic manufacturing partners.
Furthermore, the Triton 6600/2’s maximum dive duration is 10 hours, though its life support system will operate for up to 96 hours.
“It should take about an hour for the sub to get down to its maximum depth, but once there, the pilot and passenger will have plenty of time to investigate a wreck or some other artifact on the bottom, and shoot video if desired,” said Triton Submarines Project Manager Ron Stamm. “Six 20,000-lumens lights will be standard, but owners will be able to add more if needed to support their video operations.”
Dimensions
Length: 13 ft
Width: 10.8 ft
Height: 6.9 ft
Weight: 14,300 lbs
Pressure hull ID: 56.7 in
Hatch ID: 20.1 in
General
Certification 1: DNV/GL
Certification 2: Cayman Islands Registry
Payload: 550 lbs
Depth Rating: 6,600 ft
Speed: 3 kn
Crew: Pilot + 1 pax
Variable ballast: 220 lbs
Main ballast: 2,755 lbs
• Cayman Islands • Fort Lauderdale International Boat Show 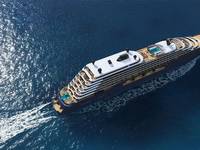