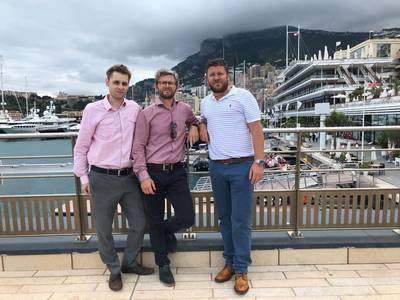 The global yachting and shipping industries are queuing up to adopt the very latest in immersive virtual reality visualization, mapping and design technology developed at The Landing, MediaCityUK.

VR solutions designed specifically for the yachting industry, as well as for the merchant shipping sector, have been developed by Sam Slater and Richard Hooson, from Manchester, the flagship being their ground breaking Digital Twin application which is set to revolutionize the marine industry.

The pair left their former careers in 2014 and joined forces to create impressive VR experiences for a range of industries. They formed Virtualize 360, or V360, and based themselves at MediaCityUK’s tech hub and co-working space, The Landing, to make sure they had access to specialist start-up support, international contacts and a prestigious MediaCityUK address.

Slater was formerly a project manager and consultant in the nuclear sector, while Hooson was a leading VR specialist and so they first set its sights on using VR technology to develop training modules for the nuclear and oil industries.

They later developed a version of their product for the property market which made virtual reality visualization and architectural design accessible to high end clients who wanted to experience their property in VR before making it a reality. The business was a great success and they began to consider expanding the technology into other industries.

In 2017, a friend of theirs, Greg Beach, who is chief engineer on one of the most technologically advanced mega yachts in the world, the 101 meter I Dynasty, suggested they look at the marine sector as a market in desperate need for their applications. The pair then spent six months exploring the market with Beach and researching the industry before developing a strategy and, eventually, a working demo for the yachting industry.

In April last year, V360 Marine was born with Beach coming on board as a specialist industry adviser and they launched their new digital product in Palma de Mallorca on the very superyacht they used as the subject of their Digital Twin demonstrator. Some of the biggest yachting businesses were there and word began to spread.

Since then, V360 Marine has brought together its experience in developing VR training modules with its work in the marine sector and has developed VR training modules for the merchant shipping industry, such as oil and gas and a dedicated division of the V360 group, V360 Training is not far away to manage the huge demand found in this sector.

This latest technology has been designed to support the changing culture within the shipping industry by making sea travel safer and minimizing the number of incidents caused by human error. Modules such as hazard awareness, how to operate safely in confined spaces and emergency response have been specifically designed to reduce the number of deaths, accidents and near misses at sea.

The founders of Virtualize 360 agree that the business development opportunities, invaluable support network and access to international markets offered by The Landing has been crucial to their success. Since they moved in to The Landing, Slater and Hooson have completed The Landing’s incubator course and attended workshops, funded by the European Regional Development Fund (ERDF), and have taken advantage of the wide range of opportunities offered in order to drive the growth of their business.