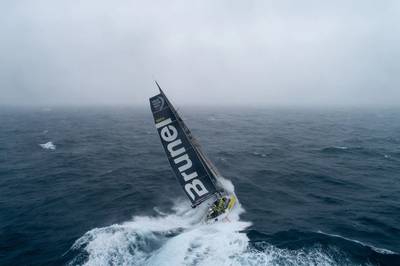 New Zealand has a lot at stake in the final stages of the Volvo Ocean Race, with two of its best sailors vying for an elusive "Triple Crown" along with the America's Cup and Olympic gold.

Peter Burling and Blair Tuke, Olympic partners in the 49er class and fellow America's Cup winners, will go head to head in the penultimate leg of the race which sets sail from Cardiff for Gothenburg, Sweden on Sunday.

But only one of them can win the round-the-world race and achieve the treble no sailor has managed, while a tight three-team finale means both could finish empty-handed.

Tuke is a helmsman/trimmer on board Spain's MAPFRE, which lies second on points behind Chinese-backed Dongfeng Race Team, while Burling has the same role with Dutch-led Team Brunel, which is three points adrift.

Burling is revelling in the race, a 45,000-nautical mile circumnavigation he and Tuke had always dreamed of, despite having barely spent any time at home since helming New Zealand to victory in the America's Cup in Bermuda almost a year ago.

"It's been a really cool journey ... a learning experience as I hadn't done a lot of offshore racing before," Burling told Reuters after a practice race in Cardiff.

Burling, who says it has been "a bit weird but also cool" racing against his good friend Tuke, is confident that Brunel under skipper Bouwe Bekking has what it takes to win.

"We just need to keep the momentum going that we've got and put together another solid one so that we've got a good chance going into the Hague," Burling said, adding that Brunel's improving speed and smart tactical calls bode well as the crew "grind down" the opposition.

"All the hard work that we have put down as a group is actually paying off now. Looking back at it we weren't very good at the beginning of the race," he added.

Time to Relax
Burling says he and Tuke have not yet decided whether to defend their title at the Tokyo Olympics, adding that he plans to head home after the race finishes in the Netherlands this month and get involved in the America's Cup preparations.

While he has got used to the sleep deprivation, with rests never longer than 3-1/2 or four hours, Burling says he has really missed showers while being drenched with sea water on the weeks-long ocean legs, and quickly got tired of the food.

"I'm pretty excited about getting home and having a bit of time just to relax, although I'm sure I will still be busy," he said.

However, having felt a growing wave of support from the southern hemisphere as he and Tuke have made their way around the world, Burling is thinking ahead to the possibility of a New Zealand crew once again winning the race.

"Maybe down the road we may try to get a Kiwi team back in the race which would be pretty amazing," he said.

"It's been such a big part of New Zealand yachting for such a long time and it's a bit of a shame that we haven't had a Kiwi entry in the last couple of editions."