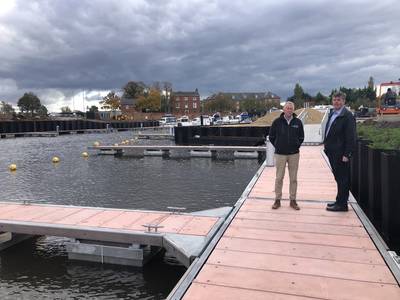 Responding to increased demand for berthing, Inland and Coastal Marina Systems has designed and manufactured a 33-berth extension to the popular Newark Marina.

Situated on a non-tidal section of the River Trent, Newark Marina’s expansion has not been without its challenges. Extensive flooding, buried vehicles and the ongoing pandemic have caused disruption to the realization of Managing Director James Wilkinson’s vision of a bright and attractive new extension to the picturesque inland marina.

The endeavor, also using local contractor Action Demolition, garnered a great deal of interest in the area, resulting in early demand from the local boating community keen to secure one of the new berths.

"The marina plays an important part in the local community,” Wilkinson says. “Our new berths will give an important boost to the local economy, attracting, as it does, boaters from far and wide. We’ve already seen a strong take up in berths and would encourage anyone interested in keeping their boat with us to get in touch.”

The onset of COVID-19 and the subsequent lockdown in March unlocked availability of important local earth moving plant that enabled the team to catch up on lost time, moving the project forward.

Working closely with James and his team, Inland and Coastal ensured the new standard leisure pontoon system, with terracotta Glass Reinforced Concrete (GRC) decking, was available for delivery as soon the ground works were complete, ready for his team to install themselves, creating substantial savings for the marina.

“James had a very clear idea of what he wanted to achieve with the marina expansion, giving his berth holders a very pleasant place to stay,” says Jon Challis, Sales Manager at Inland and Coastal. “Disruptions to works, due to flooding and the coronavirus, meant uncertainty and installation dates moving as the situation unfolded, but we kept in touch throughout and were able to deliver as soon as he was ready.”

With the installation now finally nearing completion, Wilkinson says, "I am really pleased with the outcome. We went for Inland and Coastal's own specialist GRC decking system because it gives a much brighter, lighter feeling to the marina, whilst offering great stability and grip underfoot for our berth holders."