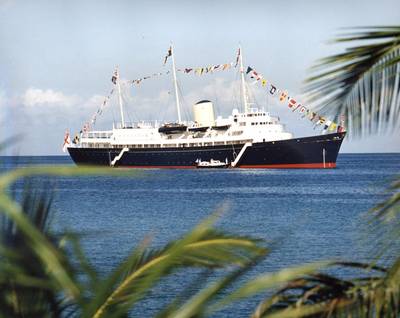 As Britain sets sail in uncharted waters on the lookout for post-Brexit trade deals, lawmakers and a former diplomat have earmarked two key weapons: the Duchess of Cambridge and a new royal yacht.
Following the vote in June for Britain to leave the European Union, and with the government facing the tricky task of securing new trade agreements, some 100 lawmakers from Prime Minister Theresa May's Conservative Party have called for ministers to back the commissioning of a new royal yacht.
"I think we have to ask ourselves what sort of Britain we want to live in and what we can do ... to make Britain great again," said lawmaker Jake Berry as he put forward a motion in parliament on Tuesday calling for the reintroduction of the Royal Yacht Britannia.
"I believe if Brexit is going to mean successful Brexit, it should also mean the return of our royal yacht," he said to loud murmurs of approval.
Britannia first saw service back in 1954 before the sun set on the British empire and was decommissioned by the then Labour government in 1997, with Queen Elizabeth shedding tears in public when she bade it farewell.
Berry said Britannia, which he said had helped secure 3 billion pounds ($3.7 billion) in trade deals between 1991 and 1995, could be replaced at a cost of about 100 million pounds funded by business or public contributions but without taxpayers' money.
"In a post-Brexit Britain, we need our head of state now more than ever," he said. "She can uniquely portray a positive role for our nation around the globe and a new royal yacht is vital for doing this," he added, rejecting critics who called it a "sepia-tinted look back to 1950s".
While Berry has the backing of many in his party and a majority of Britain's national newspapers, not all lawmakers are impressed. Deirdre Brock, a Scottish National Party lawmaker, called it the "sad and sorry Britannia plan" and a throwback to "a rosy-tinted fiction of a time that never was".
The yacht might not the only royal weapon in the government's trade armoury. The Sunday Telegraph reported that Kate, Duchess of Cambridge, wife of the queen's grandson Prince William, would be despatched on trips around Europe to help build bridges.
On Tuesday, she visited the Netherlands to carry out official engagements.
"It's obvious that the duchess is going to play this part in the future and this is a good way to start because relations with the Netherlands are good," former diplomat Oliver Miles told the paper.