The Ray 260 is Raymarine’s new VHF radio, designed to complement and enhance the latest generation of Raymarine multifunction displays (MFDS) and instruments. The new addition to Raymarine’s range features a modular design with a remotely mounted Class D Digital Selective Calling (DSC) black-box transceiver, remote speaker receiver and a full function handset, designed with a large LCD and dedicated soft keys for easy control of features and functions. The powerful, remote-mounted speaker ensures VHF traffic is heard clearly. The remote speaker’s design matches Raymarine instruments and multifunction displays for an integrated helm appearance, and there is also the option of an active speaker with a dedicated volume control.

The Ray260 VHF is able to support three remote stations and has an integral 30-Watt loudhailer and foghorn. New features include position tracking which allows up to five position reports to be received at any one time from DSC equipped vessels nearby. Vessel positions can then be overlaid on a Raymarine MFD chart display, enabling monitoring of vessels of interest or cruising groups; commercial users can keep track of their local fleet. Another new feature is Digital Voicemail, which allows a 15 second voice message to be pre-recorded and sent automatically to another DSC-equipped vessel. It can also be used to record incoming voice messages or alerts of up to 90 seconds in length.

The Ray260AIS version has all the features of Ray260 plus an internal dual channel Automatic Identification System (AIS) receiver. The Ray260AIS can be networked to an MFD, providing situational awareness in both chart and radar applications with AIS target overlays. Both the Ray260 and Ray260 AIS have NMEA200 networking capability via Raymarine’s SeaTalkng cabling system. 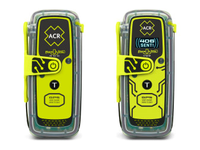