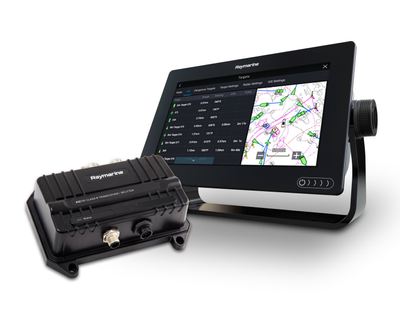 Raymarine, a brand by FLIR systems, has announced the launch of its new Automatic Identification System (AIS) transceiver featuring an integrated antenna splitter.

The new Raymarine AIS700 Class B transceiver enables boat owners to share the same antenna with their onboard VHF equipment making installation much easier, tidier and less expensive.

Delivering the best-in-class performance, the AIS700 uses the latest networking technologies for faster updating, increased bandwidth and better range. It has been built with seamless integration with Raymarine MFDs, instruments and PC-based navigation systems with expanded connectivity options.

On small boats, there is often limited space to install antennas for the boat’s communications system. Since the AIS transceiver and the boats VHF voice radio both work on the same frequency band, it is possible to share a single antenna between these two devices. The all-in-one architecture of the Raymarine AIS700 enables a tidier installation where space is a premium. Everything connects to the AIS700, minimizing wiring and reducing the overall physical footprint of the hardware. It also reduces the cost of installation because the purchase of a secondary antenna splitter is not required.

Featuring a dedicated 72-channel RAIM compliant GPS receiver for superior accuracy, the AIS700 connects to the boat’s multifunction displays using the latest NMEA2000 and SeaTalkng protocols. A built-in a device called an NMEA0183 multiplexer makes integrating AIS700 with older-generation MFDs and radios much easier. Once again, no secondary boxes are required resulting in a streamlined installation and reduced cost.

The AIS700 ‘silent mode’ allows certain users to cease transmission of their boat’s ID packets, while continuing to receive data from surrounding vessels. This feature is particularly beneficial to sports fishermen when their boats are engaged in high-stakes tournament fishing and they do not want to reveal their positions to other competitors. Another situation when ‘silent mode’ will be paramount is anti-piracy, where AIS is often used by perpetrators to watch for approaching vessels. By engaging the silent mode in dangerous waters, yachts can give themselves an extra level of security to help deter potential threats.