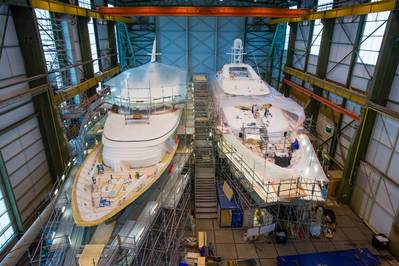 In addition to creating the finest pure-custom yachts, Feadship also has a thriving business in refitting Feadships for owners who require that their superyacht retains its brand status and be ready in time for the new season. Four iconic Feadships were recently delivered in Feadship-new condition and the variety of work on Aurora, Cipitouba (ex. Seaflower), Drizzle and Tatasu testifies to the endless options offered by the dedicated refit teams.
Originally launched in 1992, the 50-meter Aurora has been maintained to Feadship standard throughout her life. The latest refit at the Feadship yard in Makkum lasted eight months and Aurora was handed back to her delighted owners at the end of May.
The 40-meter Cipitouba, launched as Seaflower in 2002, has been returned to peak condition since arriving back at the refit yard last September. This extensive project involved fitting new generators including exhaust gas filters (HUG) and a new exhaust system, a new electrical power management system with main switchboard and a new alarm & monitoring system. The interior was also given a comprehensive makeover, with a new main deck salon & dining room and bridge deck lounge. The hardware throughout the interior was renewed, new marble was placed in the guest bathrooms and an impressive new AV/IT and CCTV system was installed. Having passed her 15-year Lloyd’s survey, Cipitouba was delivered to her owners early June.
Drizzle and Tatasu
In addition to the refit projects carried out in its home base in the Netherlands, the Feadship refit team also supports and carries out work on Feadships at other locations. A good example came over the past winter at the MB92 yard in Barcelona with the refit of Drizzle, a 2012 Feadship which now has a new length of 68.77 meters. As well as extending the swimming platform by 1.5 meters, including new stainless steel railings, Drizzle has been given a complete new paintjob and modifications to certain interior areas were madeer
The new place for exercise is the sun deck, which has been modified to include the installation of gym equipment. The entire project lasted from October 2016 to the second week of May and was carried out by production personnel from the Feadship yards in Aalsmeer and Makkum.
• Aurora • Netherlands