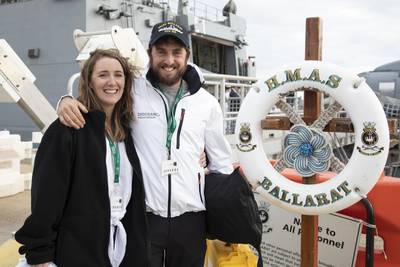 Two yachtsmen who were rescued during a solo round-the-world race are making their way home.

Irish national Gregor McGuckin was brought to Australia on board Royal Australian Navy frigate HMAS Ballarat, which returned to port Monday. The naval ship sent a helicopter to recover McGuckin from a French scientific research station on Amsterdam Island after he was transported there by French Fisheries Patrol Vessel Osiris.

Indian Navy Commander Abhilash Tomy, who suffered a back injury, is being picked up by Indian Navy frigate INS Satpura for return to India.

Both yachtsmen were competing in the 2018 Golden Globe solo round-the-world yacht race when they were de-masted by mountainous seas in the southern Indian Ocean, around 1,900 nautical miles south-west of Perth. The two men were rescued by Osiris on September 24 and were transferred ashore to a remote research station on Amsterdam Island.

“With Ballarat about to deploy to the Middle East, the crew had been on their first day of pre-deployment leave,” Vice Admiral Noonan said.

“For the team to respond to a recall at such short notice, and from all corners of Australia, is a tribute to their professionalism and dedication to fellow mariners.

“As sailors, when called upon to assist someone in distress at sea, we never hesitate.

“We are very pleased that both yachtsmen are now safe.”

McGuckin accepted Australia’s offer to transfer him to Western Australia where he was met by family and friends who had flown at short notice to Perth.