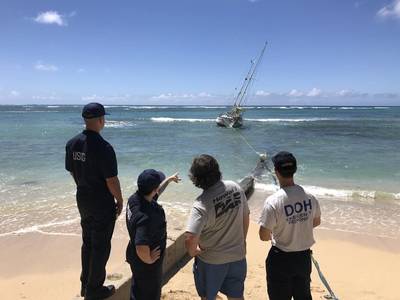 The Coast Guard, State of Hawaii, and salvors are working to remove the sailing vessel, Steady Beat, aground near Waikiki Reef Hotel, March 22, 2020. The owner’s insurance company has hired a salvage team to remove the 35-foot, double masted vessel. (U.S. Coast Guard photo by Russ Strathern)

The U.S. Coast Guard said it is working with salvors and the State of Hawaii to remove a sailing vessel that ran aground off Waikiki in Honolulu, Hawaii, on Sunday.

Coast Guard and State of Hawaii responders continue to monitor the situation for environmental and public safety impacts.

Based on mitigation activities, at 10:38 a.m., the federal on-scene coordinator determined the vessel no longer presented a substantial threat of discharge. The State of Hawaii will take the lead for removal, working with the owner's insurance and salvor.

At 2:50 p.m. Saturday, Sector Honolulu watchstanders received a report from Honolulu Ocean Safety and Lifeguard Services of the vessel aground about 50 yards offshore with two people aboard near the Waikiki Reef Hotel. The vessel was reportedly at anchor offshore when the anchor failed, allowing the vessel to drift.

The weather on the scene at the time of the grounding was reportedly 2-foot surf seas and 3 mph winds.

Responders are asking the public to use caution in the vicinity of the grounded vessel and maintain their distance for safety and to allow assessments and removal work to take place uninterrupted. 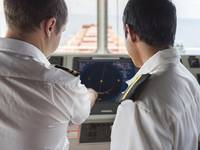