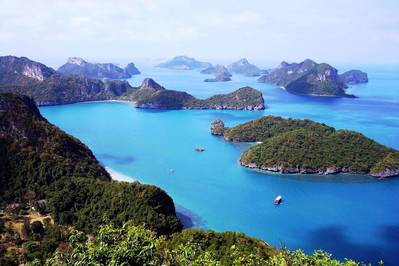 The Crowning Jewel of Thailand, Koh Samui, is luring superyachts to the other side of Thailand.
A sparkling jewel in the crown of Thailand's stunning island destinations, Koh Samui is a paradise found. The third largest island in Thailand after Phuket and Koh Chang, Samui boasts of gorgeous pearl-white sandy beaches, lush tropical rainforests and magnificent waterfalls and high-end luxury resorts and spas. All this with beautiful nearby anchorages and an archipelago that is a national treasure.
With so many breathtaking sights, it’s no wonder Koh Samui is receiving growing interest from superyachts, venturing from Phuket on the Andaman seas western side of Thailand to Koh Samui and the Gulf of Siam on the eastern side.
Now plans are underway for the island’s first marina, thanks to growing government and private support. However, many superyachts aren’t waiting for a marina. Instead they are happily discovering some amazing anchorages around Samui, her sister islands and the Gulf from Captain Charlie Dwyer, heading up Asia Pacific Superyachts and providing professional yacht support services on Samui since 2002.
The captain of the visiting sailing superyacht Vertigo agrees and writes of his experience when visiting Samui: “I had met Charlie while he was captaining Yanakee Too so knew he would understand our needs and also that no one would know Koh Samui and the surrounding islands better than him. His understanding of Thailand and the needs of a superyacht from a captain's perspective is invaluable”.
But Koh Samui wasn’t anything close to what it is today and what the owner and his guests and captain experienced. In going back three-plus decades, the island only had dirt roads, and there was very little infrastructure.  It wasn’t till the late 1980s that things began to change. To attract more tourists, the island improved its infrastructure over the years and now known as one of the world’s most beautiful tropical destinations, charming its visitors ever since the first tourists arrived in 1971.
In the past Koh Samui was hugely popular with backpackers, then as the infrastructure developed, gradually 5-star resorts arrived. In 2007 Four Seasons unveiled a high-end villa resort, the first property on the island with access to a private beach and an infinity pool for each of its luxury villas. Others followed including high-end hotels Le Méridien, the W Retreat, Conrad Koh Samui and in 2017 the Ritz Carlton. The ultra-luxurious accommodations and spectacular dining options are great for a change of pace for owners and their guests.
Those who experience Koh Samui are rewarded with an idyllic tropical retreat, white-sand beaches, a sapphire-blue sea, an abundance of tantalizing Thai cuisine and an unusually warm and friendly people.
Just 21 kilometers at its widest point and 25 at its longest, Samui’s hinterland consists of forests, hills of limestone and granite and the shoreline is made up of countless palm-fringed beaches and bays.
Yachting visitors are delighted with the close proximity to the country’s national treasure, Ang Thong National Marine Park - a compact archipelago of small and virtually untouched islands best explored by sea kayak. And beyond the Samui, the main island are other islands well worth exploring – including Koh Phangan, world famous for its monthly Full Moon parties and Koh Tao, rated one of the best diving locations in Thailand and in the world.
The Gulf of Thailand, the Gulf islands and the Marine Park archipelago offer fantastic opportunities for superyacht visits, as the conditions are calm for the majority of the year with an abundance of marine life. A visit and include jungle treks on uninhabited islands and mysterious caves waiting to be explored by kayak at Ang Thong Marine Park islands.  Samui, much smaller and enormously less populated than Phuket, is located in the middle of the vast waters of the Gulf of Thailand and has the appeal of a real island.
“The construction of at least one luxury yacht marina on Samui in the near future is driving more interest from superyachts”, shared Captain Charlie Dwyer. With the steady increase in demand for villa rentals, Samui has also become popular among investors seeking yields and a holiday home in a more remote luxury island where they can enjoy good returns on their investment – between 8-10 percent per year - as opposed to overpopulated Phuket with its link to the mainland.
Captain Charlie says the best season to visit is March to September as the rainy season is traditionally regarded as being from October to mid–December. The climate is tropical and humid throughout the year with the temperature usually ranging from 28 to 35 degrees Celsius and with no risk of tsunamis and located well out of the typhoon belt.
There are plenty of attractions and activities on the island, including the Santiburi Samui Country Club, one of the most beautiful golf courses in the region and recently voted one of the top five golf courses in Thailand. Other attractions include scuba diving, award-winning meditation and wellness retreats, a vibrant nightlife, island hopping, jungle exploring, Buddhist temples and a fantastic culinary scene.
In recent years the island has become well known for its large number of excellent restaurants, delighting visitors with some of the finest cuisine from all over the world. In fact, a growing number of high-quality chefs see Samui as the ideal location to share their impressive culinary skills. It’s even rumored the island can now boast more Michelin star chefs and five-star restaurants all in one place than anywhere else in the world.
Samui is now accessible by private jet and helicopter, with additional private airport facilities currently under construction.  The island continues to develop into the best luxury destination in Thailand and more superyachts are setting their sights on Koh Samui.
• Michelin • Thailand • Gulf of Thailand