With just days to go, the upcoming 28th Sanctuary Cove International Boat Show (SCIBS) has announced its second wave of major brands set to wow crowds from May 19 to 22.
Kicking off on Thursday, the premier annual marine industry event is set to showcase more than $150 million in luxury boats and accessories and will see major global, Australian and Queensland debuts by some of the world’s most renowned names in the boating industry.
A mix of major brands have been confirmed in an additional wave of exhibitor announcements, featuring prestige marques including Maritimo, Whitehaven, Monte Carlo, Ferretti, Palm Beach Motor Yachts, Outer Reef Yachts, and Sea Ray, as well as two of the most covetable charter vessels available in Australia, complementing the earlier brands announced, including Horizon Motor Yachts Australia, Elandra, Fleming Yachts Australia, Integrity Motor Yachts and many more.
Long-time SCIBS exhibitor Stefan Boating World have also announced they will host one of the largest on-land displays at SCIBS, along with plans to launch the much-anticipated Fibrafort F400.
With the largest on-water display at SCIBS, Australian-built long-range cruiser specialist Maritimo will host the world release of the much-anticipated M61 and the first SCIBS appearance for the S48, alongside a spectacular display comprising the M65, M58, M48, M50, S58 and the ever-popular Maritimo Offshore race boat.
Sales and marketing manager Greg Haines said the team were thrilled to be presenting the all-new M61.
Also among the debuts, Whitehaven Motor Yachts will present the superlative 6000 Sunbridge model in a Queensland boat show first. The new 6000 Sunbridge is an impressive open flybridge motor yacht designed by leading bluewater boating specialist Keith Hanson and his boat builder son Ryan.
Mr Hanson said Whitehaven had become known for its impeccable styling, performance and engineering, with the Whitehaven 6000 Sunbridge featuring European styling ideally crafted to suit the laid-back alfresco Australian boating lifestyle.
“We’re excited to display our latest products alongside those of the other major Australian and European luxury boat manufacturers,” he said.
Globally significant brand Monte Carlo will be exhibited by Sundance Marine, which will host the Queensland launch of the MCY70.
Dealer principal David Beck said visitors to SCIBS will appreciate the space and styling of Monte Carlo Yachts new 70-foot model, impressive for its entertaining area at the bow, alluring Italian design and high-tech engineering.
“It’s a 70-footer, but in terms of volume, it’s incredible,” Mr Beck said.
“The amount of space on board is significantly larger than people would be used to, due in part to company founder, Carla Demaria and her expertise, flair and passion. She brings something unique to yacht design the market has not seen before.”
Ray White Marine will be appearing at its first boat show since its appointment as exclusive distributor for the Ferretti Group.
CEO Rick Rodwell said they were thrilled to be exhibiting among the world’s leading boating and lifestyle brands, including automotive marques such as Rolls-Royce and Aston Martin.
Australian prestige brand Palm Beach Motor Yachts will have their latest Palm Beach 42 and 55 models on show, while fellow high-end yacht specialist Leigh-Smith Yachts will also host the launch of two sensational yachts - the new Alaska 43 Sedan and new Alaska 49 Sedan.
Part of the Windcraft Group, eYachts will be representing Outer Reef Yachts and Axopar brands. Windcraft managing director Peter Hrones said the 63-foot Outer Reef Motor Yacht, which boasts a Ken Freivokh designer interiors package, is a great indicator of the custom interiors clients can expect from Outer Reef.
“This model is already sold, but it will be the ideal showcase for the brand and options available,” Mr Hrones said.
“We have a lot of clients and prospective clients coming to SCIBS from WA and Victoria for the launch of the Axopar 28 Cabin, which is a highly adaptable boat offering so many different options.”
Northrop & Johnson Australia (N&J) will showcase two luxury charter superyachts – the two largest vessels on display at SCIBS – the Sahana 36-metre (120-foot) and the 33-metre (100-foot) Corroboree, and will also introduce the Mondomarine brand.
N&J Australia managing director, Cameron Bray said charter was ideal for experiencing the superyacht lifestyle without the expense of ownership, or as a precursor to owning a yacht.
“It’s the ideal try-before-you-buy, as well as giving charter guests unlimited scope to roam the world. You can meet a yacht anywhere in the world, cruise the islands and coastlines of these idyllic places, with the benefit of being able to step-on-step-off without any ongoing costs.”
This year’s sailing segment will see Performance Cruising launch the Dufour 412, Mooloolaba Yacht Brokers hosting the Queensland debut of the Jeanneau Sun Odyssey 349, Sanctuary Cove resident Ausail Marine Group displaying the latest from Catalina Yachts and Ensign Ship Brokers representing Bavaria Australia, while Sundance Marine will also showcase the Beneteau brand.
SCIBS general manager Johan Hasser said the Boat Show team was thrilled with the high calibre of diverse brands appearing at this year’s event.
He said the presence in force of the world’s best known brands was a huge vote of confidence for SCIBS 2016.
“Exhibitors are all excited and optimistic ahead of the Show. Thanks to positive industry sentiment and in response to a myriad of changes planned for SCIBS this year, The Main Pavilion, Superyacht and Marine Pavilion, and The
Boatyard have also all sold out well ahead of schedule."
“Visitors will be spoilt for choice with the huge assortment of boats of all sizes, makes and models, and a plethora of yachting and lifestyle accessories. Then there’s Supercar Street which is set to entice autophiles, topped off with plenty of family-friendly entertainment throughout the four days of SCIBS.”
• Alaska • Australia • Ferretti Group 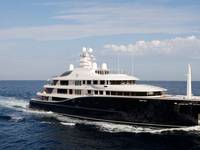