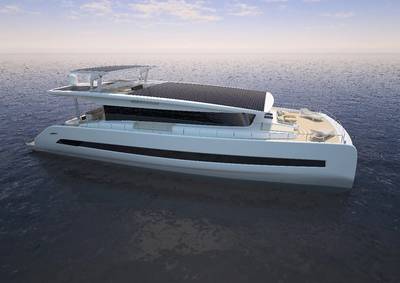 Austrian company that produces the first and only oceangoing solar-electric production catamarans in the world, Silent-Yachts announced that  its flagship model Silent 80  records 4 units sold in few months.

Previously named Silent 79, the first Silent 80 yacht was sold to her South African owner, Neil Murray, and is now under construction in Ancona, Italy with delivery planned for early 2020.

Three more units have also been sold and will be delivered later in 2020.

“To me, this yacht is a great synthesis of form and function,” Neil Murray (co-founder of the NASDAQ listed company mimecast.com), the owner of the Silent 80 #1 said.

“My intent is to promote the concept of solar yachting and I want people to see elegance in the concept, not just practicality,” he added.

“We’re extremely happy to confirm that the project that was first announced in the end of 2018 as a 79-footer has gained one foot in length during negotiations with a client,” said Michael Köhler, Silent -Yachts Founder and CEO.