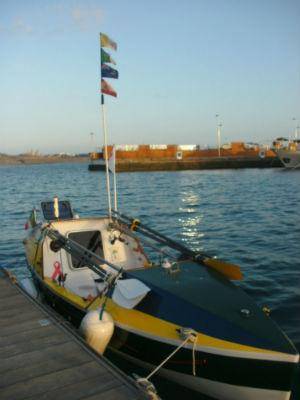 The 24-foot Brazilian made ocean rowboat christened the Spirit of Malabo nears completion of tests before its maiden transatlantic journey from Gran Canaria, Canary Islands to New York with a resupply in the British Virgin Islands. The vessel is currently docked at Pasito Blanco La Punta Yacht Club.


“The VHF, AIS, 24 hour tracking, radar, epirb, navigation lights, rowing seats and solar panels are working. The batteries are sustaining a charge. All emergency gear and dry bags is secured. The hull has no leaks”, said Victor Mooney of Queens, New York, rower of the Spirit of Malabo by phone this morning.


Waypoints will also be provided for taking advantage of favorable currents and for avoiding unfavorable ones. Mooney will be in communication with his ocean routers by satellite, which is sponsored by Hauppauge, New York based Globecomm Systems.


Mooney’s journey is designed to encourage voluntary HIV Testing. This will be the rowers four bid at this transatlantic crossing. “I’m staying in the battlefield in the war against AIDS”, Mooney added.