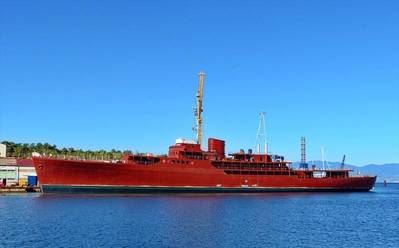 The restored flagship of former Yugoslav leader Josip Broz Tito is being converted into a hotel and a museum devoted to its turbulent history, from banana boat to meeting place for world statesmen.

Berthed in Croatia’s Adriatic port of Rijeka, the Galeb (Seagull) will open to the public in its new role next year.

The ship was built in 1938 in Italy to transport bananas from Africa. During World War Two, it was used first by the Italian navy and then by the Germans and it was sunk by Allied planes at the end of the war.

In communist Yugoslavia, it was retrieved and converted into a yacht used by Tito for his many journeys across the globe.

During that time, Galeb hosted more than 70 statesmen - kings, presidents and prime ministers - and played an important role for the Non-Aligned Movement during the Cold War era.

Tito died in 1980 and following the collapse of Yugoslavia in the Balkans wars of the 1990s, Galeb was left to rust until the city of Rijeka decided to buy it.

“I expect the ship to be completed for its new purpose in the first half of 2021,” Rijeka mayor Vojko Obersnel told Reuters.

“Its command deck, the premises used by Tito and the engine room will become a museum. The other parts of the ship will serve as a hotel with bars and a restaurant,” he said.

The work on the ship, which is now located in Kraljevica shipyard near Rijeka, cost about 60 million kuna ($9.6 million), half of which was granted from European Union funds.

Obersnel said he expected a strong interest in visiting the ship, both from home and abroad, once it finally anchors in the Rijeka dock.

“A few years ago, when the ship was in a poor condition, we organised an exhibition which was visited by 15,000 people. It is part of our and international history,” Obersnel said.