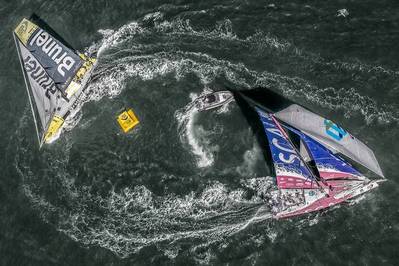 Cyclone Pam continues to delay the restart of the Volvo Ocean race with organizers grounding the six yachts in the race until weather associated with the deadly system stabilizes.

The organizers are being cautious with the sea state in the wake of the cyclone an immediate concerns. Race management and operations team have a round-the-clock watch system of personnel on Auckland's viaduct to monitor the weather and its effect on the boats.
“We now don’t expect the impact in Auckland to be as high as first feared,” said Volvo Ocean race meteorologist, Gonzalo Infante.
Organisers had already been forced to postpone the start of Leg 5 to Itajaí from Sunday (0100 UTC) to no earlier than midnight on Monday (2400 UTC)/Tuesday midday local time because of Cyclone Pam, which struck the island of Vanuatu with devastating effect at the end of last week.
Infante said the main issue now for the re-start was the sea state which is likely to greet the fleet once it ventures out in to the South Pacific and then Southern Ocean.
Pam has been downgraded to an extreme tropical storm as it passes the East Coast of the North Island. High winds, heavy rain and sea surges are hitting the Gisborne region, where all schools have been closed and people have been urged to stay home for the day.
• South Pacific • Vanuatu • Southern Ocean