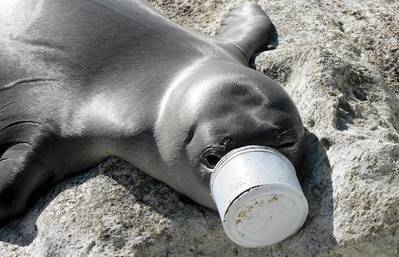 Leading offshore sailors Charlie Enright and Mark Towill are sounding the alarm about the danger posed by marine debris and pollution, after recent research from the Ocean Conservancy estimated a staggering eight million tons of plastic trash is entering the ocean every year.
The duo spent much of last year in the most remote waters of the globe during the 2014-15 Volvo Ocean Race - and observed an eye-opening amount of debris littering the ocean all over the planet.
Enright, 32, led a discussion on the topic in front of representatives from the United Nations, the US State Department and the Swedish Embassy at Volvo Group's Ocean Summit on Marine Debris in Newport, USA and Gothenburg, Sweden in 2015.
And now Enright and Towill, currently preparing their next round-the-world challenge, are eager to continue their call to action and speak at events throughout the 2017-18 route.
"It's a passion of ours - and we have the ability to see the problem first hand so we feel like we're credible witnesses," said Rhode Islander Enright.
The pair has already signed up sustainability partner 11th Hour Racing, an environmental programme co-founded by the philanthropist Wendy Schmidt and her husband, Eric Schmidt, Google's executive chairman, via the Schmidt Family Foundation.
"Our collaboration with 11th Hour Racing is unique to our campaign and it's something we pride ourselves on," he added.
"We're actually working on a sustainability report reviewing the last edition. The basis of that will form a sustainability plan for the 2017/18 race and we'll provide a guide for all of the other teams that take part."
"Until people acknowledge that there is a problem no-one will really be motivated to create a solution," suggested Hawaii-born Towill. "We would like to be involved in Summits on ocean pollution at all of the stopovers in the next race."
In research released in 2015, the Ocean Conservancy explained that the majority of plastic in the ocean 'comes from developing economies, where the increased use of disposable plastic goods is outpacing waste collection and management'.
"There is a pretty direct correlation from our experience with the amount of debris we saw and population density in some of the countries we were near, and of that some of the emerging markets too," said Towill. "How that is managed in our lifetime is probably one of the biggest concerns.
"At certain times sailing in the Malacca Strait [which divides the Indonesian island of Sumatra from Malaysia] it felt like there was so much debris that we could have got off the boat and walked on it."
Enright added: "We feel that being involved in the Volvo Ocean Race experience brings a responsibility to raise awareness about it. Through racing, speaking and volunteer work we want to engage the sailing community and beyond, to ultimately reduce the amount of marine debris and pollution in our oceans."
Four-time Volvo Ocean Racer and marine biologist Will Oxley, who has spent almost 20 years working on the Great Barrier Reef, admits there is a general lack of education and understanding amongst the general public when it comes to ocean pollution and its consequences.
"Science needs to do a better job when it comes to education and to keep working at it," he explained. "I would say visual pollution is something people can get their heads around but it's far more difficult with the pollution that we can't see.
"Micro-plastics, excess nutrients, freshwater runoff and rising sea surface temperatures are all big issues."
"Plastic is the biggest ocean pollution concern for me right now, along with the problems of agricultural runoff into the Great Barrier Reef and that is a serious concern where I live," said Oxley, who was the navigator for Team Alvimedica in the 2014/15 Volvo Ocean Race.
"The amount of plastic pollution seems to be growing exponentially. Just last week I was racing in Pala Bay in Mallorca and I have never seen so much plastic in the Mediterranean before.
"Thankfully we don't see this in the Great Barrier Reef region yet. The concern of course is all the micro-plastics getting into the food chain."
(Content provided by Volvo Ocean Race via Reuters)
• Google • Hawaii • Malaysia