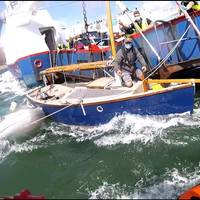 At around 3:30 p.m. on Sunday, HM Coastguard was alerted to a collision and reports that a small boat was stuck under the prow of the Sandbanks chain ferry in Dorset, England.HM Coastguard sent Swanage and Poole Coastguard rescue teams, and two RNLI lifeboats from Poole attended.Two people on board the small boat, which is described as a 22-foot privately owned shrimper, were recovered onto the ferry without injuries.The vessel had become hung up on the side of the ferry, with… Yacht Uses Alert for Rescue off the Solomon Islands

Two people were rescued after their Personal Locator Beacon alerted HM Coastguard to the fact their yacht was in trouble off the Solomon Islands.The Coastguard received the alert from the British-flagged vessel just after 9pm last night (December 13) from a position within Solomon Sea, about 20 miles south of San Jorge Island. In turn, HM Coastguard contacted the Maritime Rescue Control Center at Honiara and the authorities there began the search and rescue. A passing merchant vessel picked up two people, safe and well at around 4am (14 December).

Two sailors have been rescued after their yacht collided with a cargo ship off Dungeness, Kent.HM Coastguard received a Mayday from the yacht following the collision which happened just after 4:10 a.m. local time on Wednesday.Dungeness RNLI lifeboat rescued the two from the yacht, and both crew members are safe and well.The yacht become entangled with the superstructure of the cargo vessel and will need to be released, but is thought to be intact.A Maritime and Coastguard Agency spokesperson told MarineLink that there is no…

A man found guilty of making numerous hoax calls to the U.K. Coastguard has been jailed for four months, the U.K. Maritime and Coastguard Agency (MCA) reported. Alasdair Munro, 55, from Kyleakin, Skye, denied all charges before Sheriff Scott at Portree Sheriff Court on August 27, 2015, but was found guilty of an offence contrary to the Communications Act 2003 section 127, according to the MCA. Munro had reportedly called HM Coastguard several times on October 30, 2013, claiming a yacht was lost in Loch Hourn. Munro said he had spoken to someone on VHF radio stating that they were lost in Loch Hourn and didn’t know how to get out.

Man Attempts to Sail From Dorest to Ireland in Inflatable Dinghy

A man’s been safely brought back to shore after attempting to sail from Dorset to Ireland in a 6ft inflatable dinghy. Portland Coastguard received a call just after 3pm yesterday from a range safety craft reporting concern for a man in an inflatable dinghy approximately 2.7 nautical miles south of Durdle Door. The man was heading for Ireland in a 6ft beach blow-up dinghy. With him were two paddles, one used as a mast accompanied by a plastic sheet as a sail, and the other used as a rudder to steer. Aboard was a limited amount of food and drink. Portland Coastguard put out a broadcast requesting further information about the dinghy.