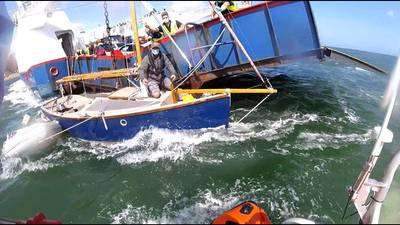 At around 3:30 p.m. on Sunday, HM Coastguard was alerted to a collision and reports that a small boat was stuck under the prow of the Sandbanks chain ferry in Dorset, England.

Two people on board the small boat, which is described as a 22-foot privately owned shrimper, were recovered onto the ferry without injuries.

The vessel had become hung up on the side of the ferry, with the staves of the mast snagged onto the ramp and the tide pushing it against the prow.

Conditions in the harbor were choppy with a strong ebb tide and a fresh south westerly wind, which together hampered any chance of the vessel getting free.

A Poole RNLI lifeboat removed the vessel and towed it clear of the stationary ferry, which was then able to resume operation. At the time of the incident the tide was going out and currents in the harbor mouth location are typically very strong.

RNLI Volunteer Helm Jonathan Clark said, "The conditions played a part in the incident today, with a strong ebb tide and a gusting south westerly wind, it really did not help the situation. The elements can be unforgiving."

It is unclear how the yacht became entangled with the ferry and a report has been made to the Maritime Accident Investigation Branch (MAIB). 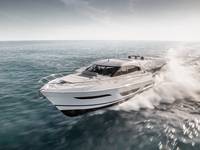 A 60-year old British woman struck by a speedboat off the Ionian island of Corfu this week died of multiple injuries from the propeller, the island's coroner, Ioannis Aivatidis…