DMC Builds the Smallest Ever Nozzle 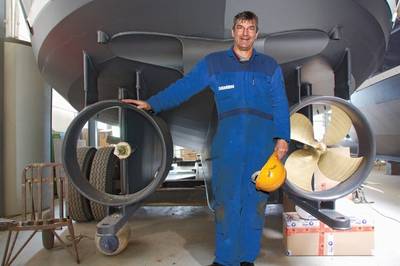 Damen Marine Components (DMC), part of Damen Shipyards Group, announced it has smashed its propeller nozzle world record by 33 percent downwards. This downsizing to an inside diameter of 665 millimeters only - from the previous 1,000 mm ‘entry level model’ - marks a new milestone for DMC’s Optima Nozzle series.

Already one-third smaller than the previous one meter (1,000mm) Benjamins, the new 65 centimeter nozzles are, however, dwarfed altogether by the biggest models in the Optima series. With their 8 meter inside diameter, these exceed the two 65 centimeter ones twelvefold.

The two record-breaking 665mm nozzles weigh 188 kilos each and were built for one 50 foot (15m) yacht. “By specific orders from the customer, DMC Optima propeller nozzles had to be installed. In addition, the owner wanted his 11-knot yacht to have two propellers. Clearly, he is somebody who knows his business, considering this explicit and uncompromising choice which also included a stainless steel inside ring. Definitely an insider,” Vogelaar added.

The two mini Optimas were commissioned at Damen Marine Components by a third-party manufacturer of propulsion systems.

DMC’s Optima propeller nozzle combines reduced noise and vibration with propelling performance. Its specific inside profile design was patented in 1998. Thousands of units have since established the Optima’s reputation as the nozzle for mixing crew comfort with performance within its own operational segment. “Its profile was designed towards an optimum ratio between engine output, fewer revolutions and thrust, both forward and reverse”, Vogelaar said.  As this works best at modest to medium sailing speeds, this model - with the matching propeller pitch - is widely deployed in inland waterway vessels, Stan Tugs, push boats and hopper dredgers. Its noise/vibration/thrust performance mixture is the Optima’s trademark.

For dredgers, Stan Tugs or inland waterway vessels, DMC’s Optima nozzles usually have an L/D 0.5 ratio (length = 0.5 x diameter). For push boats the L/D is 0.6. The two world’s smallest nozzles feature L/D 0.4 in order to still safeguard ‘crew comfort’ at the river yacht somewhat higher 11 knot speed. Like every DMC nozzle, these two were engineered separately at the DMC center in Hardinxveld-Giessendam, Netherlands. Vogelaar explained, “No two vessels are the same, not even with identical dimensions. Consequently, every nozzle we produce, will get dedicated engineering first, for optimum output.”