MarineMax has announced that Bryan Riley has been promoted to Regional Service and Parts Manager of Midwest and North Florida stores.

Riley grew up in Omaha, Nebraska and moved to the Lake of the Ozarks in 1989. He began his career in the Marine industry in 1993 when he started working at Port Arrowhead Marina as a Delivery Captain and later as Service Manager. Port Arrowhead Marina joined the MarineMax family in 2006 and afterward, Riley became the Operations Manager. Along with his wife and two children, he enjoys boating and all watersports. 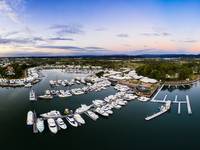