One of the largest in-water boat shows in the country and the premier show in New England, the Newport International Boat Show encompasses 13 acres and will host hundreds of exhibitors from around the world with new powerboats and sailboats ranging from 16 to 100 feet, plus a variety of accessories, equipment, electronics, gear and services for boaters. The Newport International Boat Show is expected to draw tens of thousands to historic Newport.

To celebrate its 45th exquisite sapphire necklace—the gemstone associated with the month of September and the traditional 45th will be selected to find the necklace on Sunday during the show through a series of clues on a dedicated mobile engagement app.

Confident Captain’s At The Helm program returns with an expanded line-up of in-ater and shore-based training courses for beginners or seasoned boaters. These courses are ideal for individuals or families who are interested in learning how to sail or operate a powerboat, or for those who simply need a refresher course.

The highly anticipated Newport for New Products (NFNP) program provides attendees with the exciting opportunity to view boats and products making their first ever debut in the U.S. at the Newport Show. Each NFNP entry is judged by a panel of experts and awards will be given for best new powerboat; sailboat; navigation product; and boating operation, maintenance or safety product, at a ceremony on Friday, September 18th  Anniversary, show producers will host a Treasure Hunt for an  anniversary gift—as the prize. One hundred lucky participants.

Also on tap for showgoers are a variety of educational seminar topics presented by experts in their field and the ever-popular annual Cruisers Party hosted by Cruising Outpost. 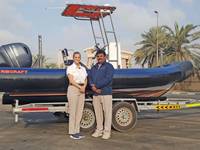